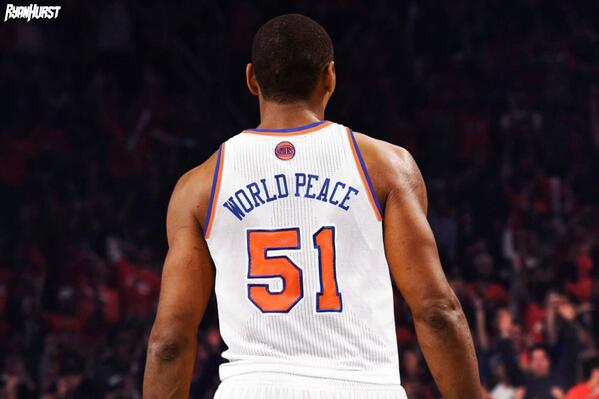 Metta World Peace. Who is a Queensbridge native is heading home. That’s right Metta who was recently amnestied by the Lakers has just signed with the New York Knicks. According to reports the deal for 2-years worth and is worth 3.1million dollars. 2nd year is a player option. Metta will still be paid 7.7million by the Lakers this year. Metta sounds excited he spoke with USA today “The team is amazing.I’m excited to play and hustle. I’m excited to hustle for (Raymond) Felton, for Iman (Shumpert), for Tyson (Chandler), Melo (Anthony), (Amar’e) Stoudemire, coach (Mike Woodson). That’s all it’s about right now. It has nothing to do with New York the city. The only thing that’s important is those players that I will be joining and touching the hardwood with. That’s all that’s important.” Metta brings a defensive mentality that the Knicks will need. He’ll be the tough guy for them as well. It’s a solid pickup for the Knicks. They have already acquired Andrea Bargnani this off-season. Will World Peace and Bargnani make them better than the Heat? We will see, but right now I would have to say no. The Knicks are still a top five team in the East. I still can’t rank them the best team in New York either (Thanks to Brooklyn). But it’s a long season, and anything can happen. I would say for the Knicks to not have any cap room I’d say they had a solid off-season. And if you guys were wondering Metta will wear his father’s old High School number (51) this year.