The Golden State Warriors have been rumored all summer to be in the Kevin Love sweepstakes. But due to their reluctance to include their up and coming superstar, Klay Thompson the Warriors gave up on their pursuit of Kevin Love. If they are still in search of a stretch 4 power forward, I think they need to go out and acquire Ryan Anderson from the New Orleans Pelicans. Using ESPNS trade machine, I’ve come up with a scenario where the Warriors can acquire Anderson. This trade will be involving the Warriors, Pelicans, and Kings.

I like this trade because the Kings get a All Star caliber PF in David Lee, Warriors get their stretch four PF in Ryan Anderson, and the Pelicans add depth in Carl Landry. Also, if the Pelicans don’t want to keep Jason Terry they can always buy him out, and maybe even trade him.

I’m not sure if this trade happens, but it’s something to keep an eye on.

On Friday night Derrick Rose suffered a right meniscus tear against the Portland Trailblazers, and he’s scheduled for surgery today putting his 2013-2014 season in jeopardy. Like most Bull fans, and NBA fans in general this injury news really stung for me. Not because it ruined the Bulls NBA title dreams, but because I’ve witnessed another terrible knee injury for Derrick Rose. This is a guy who did everything right by sitting out an entire year to rehab his knee just to come back a better player. Now he comes back this year, and injures his right knee is just unsettling. Now I’ve heard all the so called Bull fans, and NBA fans all around raise questions about Derrick Rose regarding his health. I even heard the word  “injury prone” being tossed around. People have already started raising doubt about him never being the same player again. I believe if Rose does the exact same thing for his right knee as he did for his left knee he will come back just fine. This injury should wake up the Bulls front office, and make them realize that they’re left with no choice and need to blow up this core. This team is a great team in the regular season, but come playoff time they don’t have enough scoring options to compete with the Miami Heat. I’ve always said you can’t win a championship with Luol Deng being your second best player. This isn’t a shot at Deng, because he’s a good player, but the Bulls need more than that from their second best player, and that’s something Deng can’t do. It’s been reported that Deng would like a raise in his salary (he’s currently making 14million), and that’s something the Bulls can’t do. Deng has piled up a lot of mileage on his body due to him ranking first in minutes played the last several years. Bulls missed plenty of opportunities to trade Deng for years especially when his value was high around the NBA after the 2011-2012 season when he made his first All Star team.  Now they’re left with no choice, but to trade him rather than watching him walk after the season. I’ve used the ESPN trade machine, and looked at some trades that may work for the Bulls if they finally decide to trade Deng.

Jameer Nelson And Aaron Afflalo for Luol Deng: Bulls can look to trade Teague, and have Jameer and Kirk run the point for the rest of the season. Kirk is a free agent after this year so you’re ultimately allowing Jameer to be your pg next year. In my opinion Afflalo is a guy that’s very underrated around the NBA. Is he enough for the Bulls at shooting guard? Maybe, and maybe not but it’s better than having two small forwards in your starting 5, and I’m sure Afflalo can provide more of a scoring punch than Deng.

Marcus Thornton and Jimmer Fredette for Luol Deng: I don’t like this trade at all, but if the Bulls are really looking to move Deng they could consider this. Jimmer is a free agent after this year and I think he could still be a solid player in the NBA if he’s used right. People have to remember the guy knows how to shoot the rock. I was more of a fan of Marcus Thornton when he was in New Orleans. I think he’s a solid player, but I’m not too sure if he’s a piece the Bulls need especially with him making 8million dollars the next two years (Remember the Bulls are cheap).

Eric Gordon For Luol Deng: I know no one likes this deal, and I dont blame you but if Gordon somehow stayed healthy for a full season it’s something I would consider. This would be a trade that helped both teams. The Pelicans need a small forward, and the Bulls desperately need a shooting guard that can score, and take some pressure off Derrick Rose. I know the Bulls have their dreams set on landing a big star in free agency, but lets be honest the Bulls haven’t been too successful at landing big name free agents. Unless you would like to consider Eddie Robinson, and Ron Mercer big names. If they don’t have confidence in landing Carmelo Anthony or Kevin Love this offseason and next this should be a trade they at least consider.

Personally I feel like the Bulls should trade Deng and tank the rest of the way so they can get a lottery pick in this highly talented 2014 NBA draft. But I know a Tom Thiboeau team would never do such a thing.

I’m not sure what’s the next move for the Bulls, but I do know they need a trade and reshape their roster. Rather that’s Deng or somebody else on this roster, I just know something needs to be done. I would probably say Noah, Rose, and maybe Butler are my untouchables. But anyone can be traded for the right offer. I’ve never put my hopes and dreams into John Paxson, and Gar Forman making moves to improve this roster. But I do know this injury may give everyone an idea about what kind of front office the Bulls have. Along with what they do in the next two offseasons.

And for everyone who thinks a trade isn’t possible just remember even Gilbert Arenas, and Joe Johnson got traded once. Just know that no contract is untradeable in the NBA.

I just pray Derrick Rose has a speedy recovery, and hope that he can continue his NBA career injury free.

With the help of Ryan Anderson, Anthony Davis, Jason Smith, and Jrue Holiday the New Orleans Pelicans unveiled their new jerseys today. This is a new era for New Orleans basketball they said bye bye to the Hornets name and hello to the new name, Pelicans. They had a very successful off-season with the acquisitions of Jrue Holiday, and Tyreke Evans the Pelicans will compete in the tough Western Conference for a playoff spot. If this team clicks, and stays healthy (I’m looking at you Eric Gordon) look out. They will be very exciting team to watch this year. I’m not really feeling the new look, but they can always change it in a couple of years. 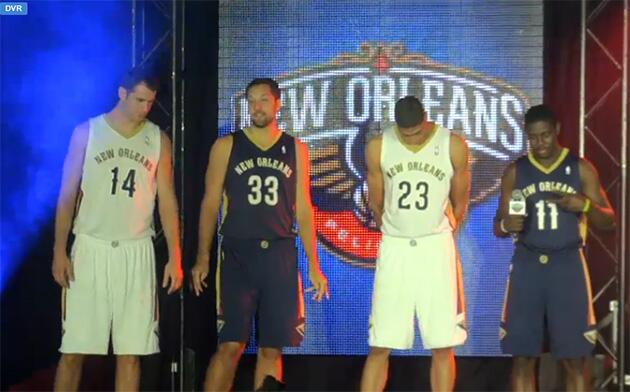