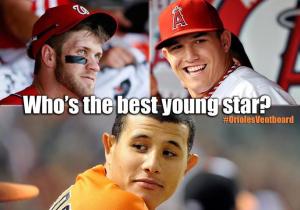 I know all the talk right now is all about Bryce Harper and Mike Trout and rightfully so. However, the young 20 year old Manny Machado has quietly been putting up numbers since being called up to the majors last August.

He’s had a career BA of 301. early on in his young MLB career, and in his first full year in the majors, he’s hitting a remarkable 335. That ranks him 7th in the MLB  and puts him in the lead for doubles in the league. He also ranks #2 in hits behind Miguel Cabrera. Also, when you look at the numbers of Harper (career BA 274.), Trout (career BA 305.), and Machado, he should be in the same conversation as Trout and Harper as the future of the MLB.

I think it’s safe to say we will see all three of these young stars at Citi Field for this year’s All Star game on July 16th. 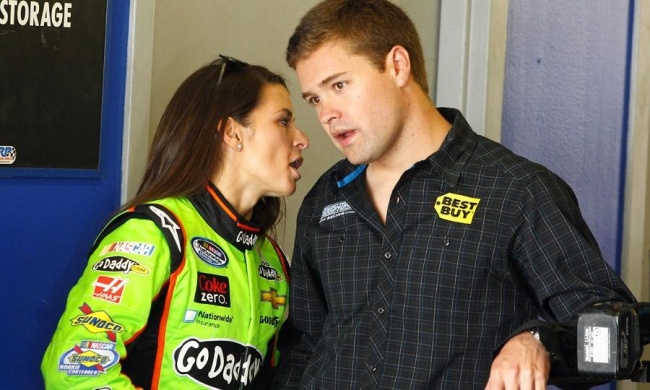 Win by any means necessary! That’s how most pro-athletes will define competition nowadays. Some athletes, like LeBron James, think there’s no shame in “flopping” as long as it results in a win. Others, like the great Ray Lewis, see nothing wrong in using a little bit of deer antler spray in order to get an advantage.

Well, during Sunday’s Coca-Cola 600, Ricky Stenhouse Jr. chose to kick his level of competition up a notch by doing something that most guys probably wouldn’t do. As the field came around lap 319, Stenhouse decided to make his big push for first place by taking out his girlfriend of several months, Danica Patrick, bumping into her car and causing it to crash into Brad Keselowski’s.

See, I would consider myself to be a very competitive guy, but honestly, I would never have the onions to make a move like that. At the very least, you have to be 100% positive that making such a move will guarantee you win the race, in which case I’m pretty sure even your racing girlfriend would understand and forgive you for it. For our sake, however, let’s hope Ricky’s legendary 14th place finish was just enough for Danica to kick this bum to the curb and focus more on making sexier Go Daddy commercials.

While watching NBA games, I tend to notice flops, and no team flops like the Miami Heat. Their flopping is more noticeable having one of the leagues top floppers on the team: Mr. Shane Battier.

Then today I was reading an article about Lebron James saying flopping is an “effective strategy.” I love Lebron’s game and appreciate what he’s done for the game, but enough is enough. It can’t be a strategy when Lebron, who is 6’8, 250 lbs, and built like a football player, falls down to the ground because DJ Augustin, who’s 6’0 (that’s probably being nice) and weighs 180 lbs, is fighting through a screen and bumps Lebron.

I don’t see why refs allow this flopping to happen or why the NBA hasn’t came down on anyone on the Heat for flopping as well. If there’s a rule stating you can’t flop, why are you allowing these guys to fall all over the basketball court like they’re in ice skates? I feel the league should play it both ways when it comes to flopping — not just fine Tony Allen for a flop. Shane Battier should be fined a good amount in these playoffs along with Lebron for their take on flopping. It’s like if you’re that big, no way you should be falling down as much as you do during games. 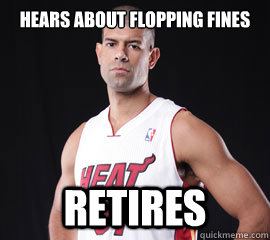 Album sales are in, and it looks like French Montana’s debut album, “Excuse My French” sold 49,775 copies in its first week. That’s far from the numbers he anticipated early on when he first signed with Bad Boy/MMG. Nonetheless, at least he dropped an album.

The three big records off the album are “Freaks,” “Ain’t Worried About Nothin,” and the platinum record, “Pop That.” I listened to the album once, and I thought it was alright. FAR from “The Best Rap Album Of The DECADE” as French claimed it was while promoting it, but you have to be proud of how popular French has become in the past year, and his album only dropped last Tuesday.

On the album you can expect features from Birdman, Rick Ross, Nicki Minaj, Jeremih, Snoop Dogg, Scarface, Mavado, Ace Hood, The Weeknd, Max B, Ne-Yo, Raekwon, and, the obvious one since he’s signed to him, Diddy.